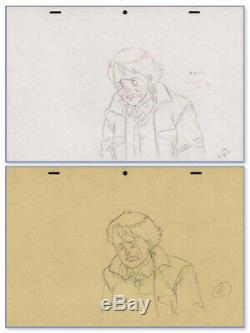 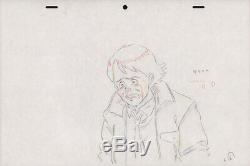 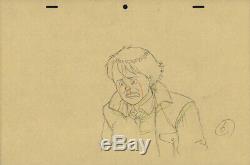 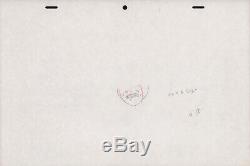 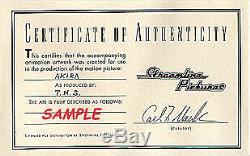 Akira Genga Drawing Set for Anime Cel Animation Art Kai Crying Otomo 1988. Powerful image of Kai when he sees Kaneda's bike in the rubble and assumes the worst. Includes genga (A6), genga correction and another partial drawing of his mouth movement. Done in graphite with yellow, blue and red highlights. Genga correction (yellow sheet) might be done by Mr. He worked on many genga corrections around this CUT numbers according to Akira Animation Archives book published by Kodansha. Just look at his expression and you can feel how he feels! Pencils are in great condition with minor wrinkles and creases as shown. From Sequence 21, Cut 97.

Image size 6.75 inches x 6 inches. Overall size is 9.25 inches by 13.5 inches. Comes protected in archival bag. Don't miss your chance to own this piece of animation history! Includes Certificate of Authenticity stating that this art was used in the production of the Akira movie.

Created by legendary director, Katsuhiro Otomo, over twenty years later this film remains the greatest technical achievement in the history of cel animation. It's still one of the top grossing animated films of all time. The June 2002 issue of Wired Magazine ranks Akira among the top 20 greatest SF films of all time and is the only animated feature listed among such films as Blade Runner and Star Wars. The long-discussed live-action adaptation is now slated for release in 2013 with Jaume Collet-Serra direct the film.

Bandai has released some cool items in honor of the 30th anniversary of the manga. Please take a look at our other auctions. For other cool items from the Soul of Tokyo including anime art, cels, robots, books, and more. Don't miss out on the new listings and special sales!

All items are used and in good or better condition unless stated otherwise. A detailed description of each lot is accompanied by an image. Descriptions are correct to the best of our knowledge, but no guarantee is implied or intended. We are experts in anime art and strive to pass on as much knowledge about our items as possible in the descriptions. We include lots of scans and pictures. This takes time, but we feel you deserve it! Also, we use high quality professional packing materials and go to great lengths to ensure your collectibles arrive in the same condition as when they leave us.

This item is in the category "Collectibles\Animation Art & Characters\Japanese, Anime\Akira". The seller is "souloftokyo" and is located in Encinitas, California. This item can be shipped to United States, Canada, United Kingdom, Germany, Japan, Australia.