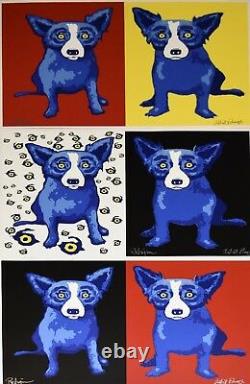 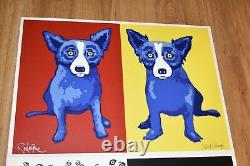 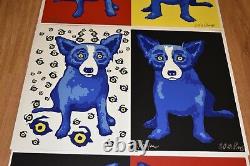 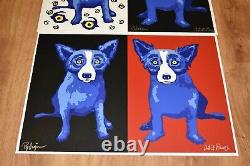 Rodrigue is mostly known for his signature BLUE DOG artwork series. The inspiration for George Rodrigue's BLUE DOG artwork series came from his pet dog named Tiffany that he owned when he was a child. Rodrigue took the Blue Dog through numerous phases of development, eventually using the image to comment on life today. George Rodrigue didn't begin his career with the BLUE DOG artwork series, Rodrigue first began painting works that represented his cajun background. These Rodrigue artworks included scenes of people or houses in the swamp or bayou. Before Rodrigue's death in 2013 he reverted back to his beginnings and continued his cajun themed artworks. Half N Half Complete Set Of 3. Dimensions: 22 X 32 each. At FTI Gallery we specialize in POP, Contemporary, and Urban art with a large collection of works from Blue-chip artists such as Warhol, Haring, Rodrigue, Lichtenstein, Johns, Banksy, and Fairey to name a few. Works available from some of the most desirable influential artists of the 20th and 21st centuries. CHECK OUT OUR OTHER LISTINGS. Do you have POP, Contemporary or Urban art for sale?

This item is in the category "Art\Art Prints". The seller is "finerthingsinc" and is located in Mount Laurel, New Jersey. This item can be shipped to North, South, or Latin America, all countries in Europe, all countries in continental Asia, Australia.