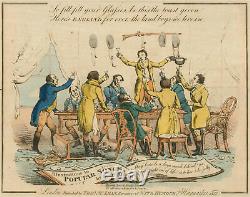 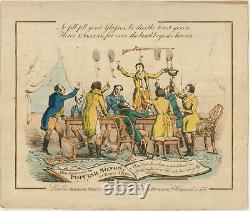 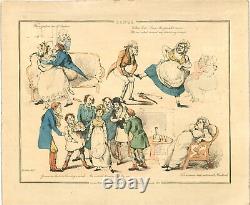 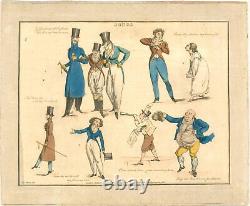 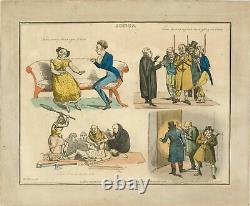 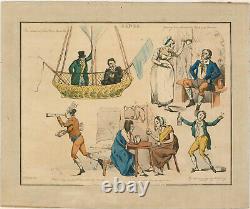 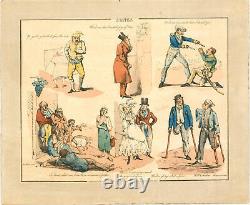 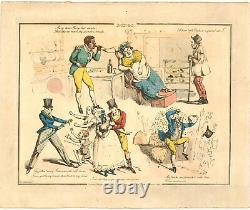 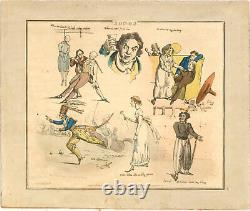 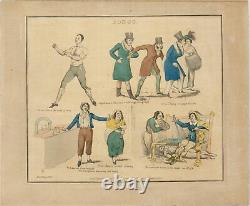 Published by'Thomas McLean, Repository of Wit and Humour, 25 Haymarket, 1822'. Each etching is on wove laid to board. The condition is typical for works of this age. Some surface marks, light foxing and discolouration to the pages. Light scuffing to the corners of the boards.

His most prolific period of painting and drawing occurred between 1816 and 1831. He was the third son of Samuel Alken, a sporting artist. Two of his brothers were George and Samuel Alken the Younger, also an artist.

Alken went on to father five children, of whom two were artists, Samuel Henry, also a sporting artist, known as Henry Alken junior, and Sefferien junior. Alken worked in both oil and watercolor and was a skilled etcher.

His earliest productions were published anonymously under the signature of'Ben Tallyho', but in 1816 he issued'The Beauties and Defects in the Figure of the Horse' comparatively delineated under his own name. From this date until about 1831, he produced many sets of etchings of sporting subjects, mostly coloured and sometimes humorous in character, the principal of which were:'Humorous Specimens of Riding' (1821),'Symptoms of being Amazed' (1822),'Symptoms of being Amused' (1822),'Flowers from Nature' (1823),'A Touch at the Fine Arts' (1824), and'Ideas' (1830). Besides these, he also published a series of books. Alken provided the plates picturing hunting, coaching, racing, and steeplechasing for The National Sports of Great Britain (London, 1821).

Alken, known as an avid sportsman, is best remembered for his hunting prints, many of which he engraved himself until the late 1830s. He created prints for the leading sporting printsellers such as S. Nimrod's Life of a Sportsman, with 32 etchings by Alken, was published by Ackermann in 1842. In many of his etchings, Alken explored the comic side of riding and satirized the foibles of aristocrats, much in the tradition of other early 19th century artists. A collection of his illustrations can be seen in the print department of the British Museum. Alken died in April 1851 and was buried in Highgate cemetery.

Although fairly affluent for most of his career, he fell on hard times towards the end of his life and was buried at his daughter's expense. You can view our full collection of these here. Size: 21.2 x 26.9cm (8.3" x 10.6").

Sheet: 25.7 x 30.4cm (10.1" x 12"). Includes a Certificate of Authenticity. All our artworks are packaged to a very high standard, using protective cellophane wallets, hardboard backing, and bubble wrap. Framed pictures are packed into custom made cartons. All of our items come with a Certificate of Authenticity. Bill, one of the directors was joined by his son, Dan, in 2012. Bill and Dan (now managing director) are joined by 6 art historians/gallery specialists, 2 stock controllers/dispatchers and an art conservation specialist. We operate from dedicated premises in Corsham, Wiltshire in the UK and utilise various humidity controlled storage facilities in the local area. The art in our online gallery has been handpicked by our team of highly qualified art historians. We try our hardest to ensure that artworks are described and photographed as accurately as possible. This includes using strobe lighting and colour calibrated screens to colour check our images. This item is in the category "Art\Art Prints". The seller is "sulisfineart" and is located in this country: GB.

This item can be shipped worldwide.